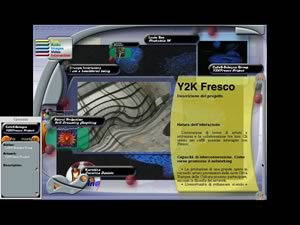 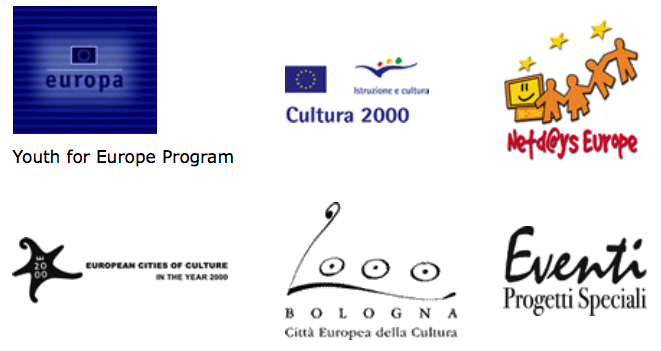 Nature of Interaction – what kind of interaction takes place

Artist’s and institutions’ works interaction and collaboration. User in C9.net cafès can interact with artworks.

Network scope – how does the project promote networking

– The production of a big common artwork where many artists coming from the nine European Cities of Culture can take part, according to the philosophy of the network.
– The opportunity to develop exchanges and collaborations between artists and Institutions of different countries.
– The seek for communicative and creative opportunities in a cultural network (the Cafe9 network) and the knowledge of the practical and technical know how.
– Cafe9 users can interact with the work.

Participant profile – what has the project group done earlier

Artists and cultural Institutions coming from the European Cities of Culture. Users in the Cafès.

A wide fresco of the contemporary European culture, made with the help of artists, about the theme of the millennium (the new millennium will start on January, 1, 2001). During Cafe9, the creations of the artists working in any cultural field – artists who have been selected in each – will be distributed in all the CyberCafé in each City of Culture, in order to produce a wide panorama of European artistic cultures. Even the Cafe9 events are going to enter this common work. As long as all the European cultures and expressive languages are represented, there won’t be any limit for the accepted techniques: audio, video, digital forms, painting, sculpture, poetry, writing, architecture, photo, happenings, performances and other techniques are equally valued. A window will mention the artists’ names and the titles of the works which are being presented in that moment.
A software precisely studied is going to play the role of a director: it will mix and continually broadcast the artists’ works, till it creates a multimedia muddle, a wide panorama of the contemporary endless transformation which should represent the different forms of art and expressions in the various cultures. A general director has not been foreseen, so the final product is going to be developed in its whole without a unique plan. However, some co-operations could sprout and grow while the different parts of the panorama are being produced.
Even the audience of the nine CyberCafés is allowed to take part in the event, by sending comments, texts and material from the places/installations located inside the CyberCafés or by creating its favourite choices in the documents that will be shown (films, images, texts, musical works).

The main characteristics of the project are:

a) The production of a big common artwork where many artists coming from the nine European Cities of Culture can take part, according to the philosophy of the network.
b) The participation of all the expressive languages: images, films, animations, sounds, music, written texts, poems, photos, painting, sculpture, architecture, happenings, performances. Even the traditional forms of art will be represented (by creating digital photos or films). There is non exlusion of no-technological art forms.
c) To Y2K Fresco can participate also artists from European Cities of Culture which are not represented in C.9 network. In these cases it is important that their material is stored in digital size on CD-ROMs (see below).
d) The production of a big unique and common work made by artists coming from the nine European Cities of Culture; this work is original and cannot be repeated in its whole and structure, although it has a digital foundation.
e) The opportunity to develop exchanges and collaborations between artists and institutions of different countries.
f) The seek for communicative and creative opportunities in a cultural network (the Cafe9 network) and the knowledge of the practical and technical know how.
g) Materials gathered and produced can build the basis for the first European artists database. 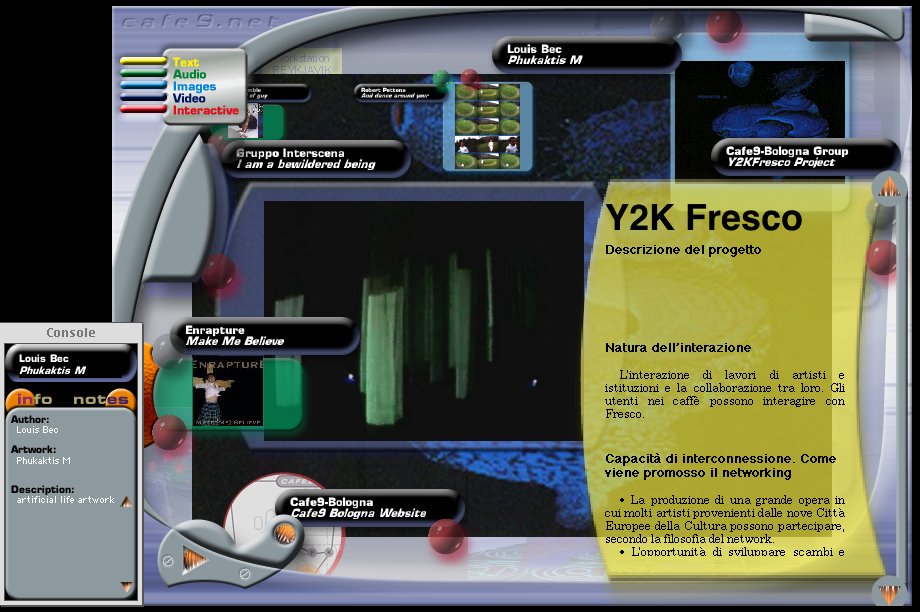 The cultural responsible people of the CyberCafés of each European City of Culture will inform (by means of an announcement or invitation) and select the artists who are interested in the event (see below for more information).
An important role is played by the software whose aim is to publish the works in the cafes. This software must be planned and built in accordance with the form of the works themselves (there are essentially four general categories: still images, dynamic or audio-video images, musical products and written texts) and with the presentation methods: so that, for example, sound materials always match still images.
In addition, it is necessary to specify the forms of the digital files (see below for more information).

At the end of Cafe9, one (or more) CD-ROM or DVD-ROM containing the artists’ materials and the software used for Fresco Y2K will be produced, in order to allow to reproduce the experience, although in a different (every time the software generates different pictures) and personal way. It is a one more good reason for the artists to participate, because they have a final document which is more reliable and portable than a web site, especially after the end of C9.net. This can be also an interesting documentation for many purposes.

Some Y2K Fresco screenshots (click on the pictures to enlarge): 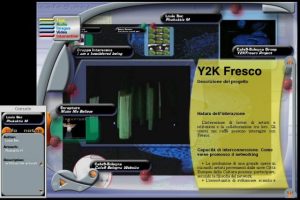 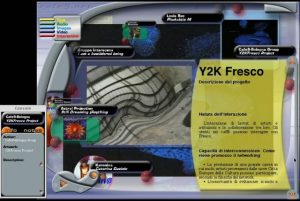 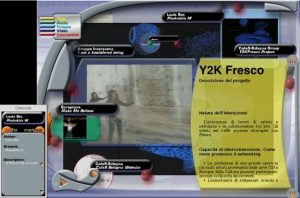 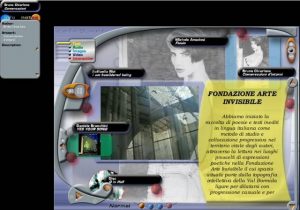 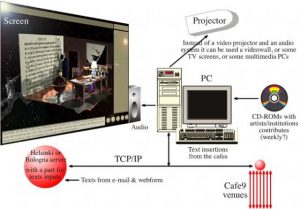 Y2KFresco is not an Internet project, although in part it works by Internet and TCP/IP protocol (see below) to perform informations. It will be running inside Cafe9 venues. Its network attitude is based on human collaboration between C9 cities, artists and Institutions, in giving a panorama of contemporary art in Europe through new technologies perspective, and in making people in the venues interact with art. In linking and mixing many different forms of expression in a dynamic digital and interactive patchwork it could be considered as an artwork in itself.

Y2K Fresco is a totally new project which was developed especially with Cafe9 network in mind, and will be owned – in rights and use – by Cafe9 members. So it should be considerered open to any suggestions and implementations from all Cafe9 members. A common and shared work in progress.

1) The nine cities inform artists and institutions about Y2K Fresco project, and explain them the aim and the nature of the project. It should be noted that:

a) artists and Institutions must – should – not necessarily be involved in new media or new technology arts or espressions.
b) Y2K Fresco can allow a large artforms and expressive languages participation (audio, video, many digital artforms, painting, sculpture, poetry, writing, architecture, photo, happenings, performances…)

2) Artists/people/Institutions interested in Fresco should give their materials in digital size to the cities content coordinators (or to someone else charged on Fresco project). They would sign a participation form about publication rights (to be studied).
If artists have not the possibility to give materials in digital form the cities may address them to public conventioned services, or each city could decide to setup a service of this kind or to devote a budget to digitalization.

– BMP, TIFF or JPG for images
– RTF (rich text format) for texts
– WAV, AIF or MP3 for music and sounds
– MOV, AVI or FLA for movies

For music and movies we propose the length of materials should not exceed 5 minutes (to be also discussed).

3) Cities collect the materials, store them on CD-ROM and send the CD’s by courier to the city of Bologna. We propose this expedition should be on a weekly base (for a total of 8 expeditions during Cafe9).

4) The city of Bologna technically revises the materials and organizes them into category to be suited by Fresco software. Then the organized materials are stored on CDs (one for each city) and sent by courier to the cities.

5) In the Cafe venue each city has one PC, wired to a screen projector, or to a videowall, or to a TV system, with an audio system, or one or more multimedia PCs. The Fresco software is installed in the PC(s) and can read and perform the materials organized in the CDs. People in the cafe venues can interact with the software with texts (introducing them with a common keyboard) and changing the default software preferences to perform particular kind of material. Texts can also come from the network and Internet (by e-mail or web forms). Texts are stored in a small part of the main Helsinki server through a TCP/IP line, and Fresco software can recall them as well as the normal files from the CDs. The ISDN TCP/IP line used for text storing and retrieving is the same the cities use for C9 network.

6) At the end of Cafe9 one (or more) CD-ROM or DVD-ROM containing the artists’ materials and the software used for Fresco Y2K will be produced (to be discussed according to money and sponsors), in order to allow to reproduce the experience, although in a different (every time the software generates different pictures) and personal way. It is a one more good reason for the artists to participate, because they have a final document which is more reliable and portable than a web site, especially after the end of C9.net. This can be also an interesting documentation for many purposes.

7) Materials gathered and produced are owned and shared by all the cities, and can build the basis for the first European artists database. About the Fresco software

Y2K Fresco software, which is installed in the PCs in Cafe9 venues (at least one in each city), must be able to read files from external devices (like CD-ROM) as well as to store and recall files (in particular text files) through a TCP/IP network. It must also be able to dinamically and smoothly perform all the materials with a well suited interface, and to give people in the cafes the possibility to easily interact with the contents.
After a work of consulting in Bologna involving various experts we came to the conclusion that the best way to have the Fresco well running and performing is through a Macromedia Director application.
Please note that this application works as a visualizer, or, better, as a content performer. It can work with every kind of file and it can perform it in a fine way. Not only artistic contents but every kind of content for many purposes (educational, didactical, and so on) can be performed.