FiveWordsForTheFuture is a project born from the idea of understanding the future. It has originated from Noema and has started from an idea of Pier Luigi Capucci, Renato Alberti, Emanuele Bertoni and Giorgia Benvenuti. FiveWordsForTheFuture‘s main object is to help people to identify and understand what’s new, the innovation, and to imagine the future. However not in the sense of trying to divine and  present some sort of an abstract, utopian or dystopian remote future – like the magicians and the astrologers try to do – but in the sense of helping people to declinate their lives into a possible time which is going to come.

This attention to the future should not sound provocative. As humans we have the skill of designing, of inflecting our life to the future. In fact we live in the future, a relevant part of our thoughts, acts, activities, ideas, projects, a relevant part of our life is addressed to the future. Let’s do some examples. We keep agendas to tune our commitments with the future. We build monuments to decline our memory to the future (even photography is a kind of a monument, although a very particular one). We trust the weather forecasts’ reports about our future. There are people who pay magicians and astrologers in order to divine their future. Money is a kind of an infinite promise of future, and we put our money in the banks to be safe in the future and the banks invest our money in the future (although often in a wrong way). The insurances are a way of preventing the future and some are mandatory. Many people make bets, invest money in the stock exchange market or risk gamble, hoping in the future. We buy goods on credit and using investments plans. The activity of the companies is planned in the future and based on social, economical and cultural previsions. Some firms have the only task of predicting the future and selling it to other companies, which in turn put the dimension of the future in their industrial plans.

The very etymology of the word “project” is from Latin and means “to throw beyond”. Beyond what? Certainly beyond the difficulties and the obstacles that all projects must go through in their life, but especially “beyond time”. And what is the real meaning of the word “hope”, which is a typical human construct, but wishing for a future tuned with our desires and expectations?

Therefore thinking, imagining ourselves in the future is an innate condition of the human nature, such a normal condition that people rarely are aware of it. But sometimes people seem unable to have visions, they seem pointing to the past with only weak or no ideas for the future. People appear frightened by the future. They are not the subjects of the ongoing transformations and innovations, but the objects, they undergo them. Sciences and technologies seem keeping people apart, leaving them behind. People are unable to imagine themselves in the future, especially in this period of crisis where, on the contrary, it would be essential to be able to look forward, to innovate, to have visions.

FiveWordsForTheFuture is born to help people to understand innovation, to imagine the future and have visions. 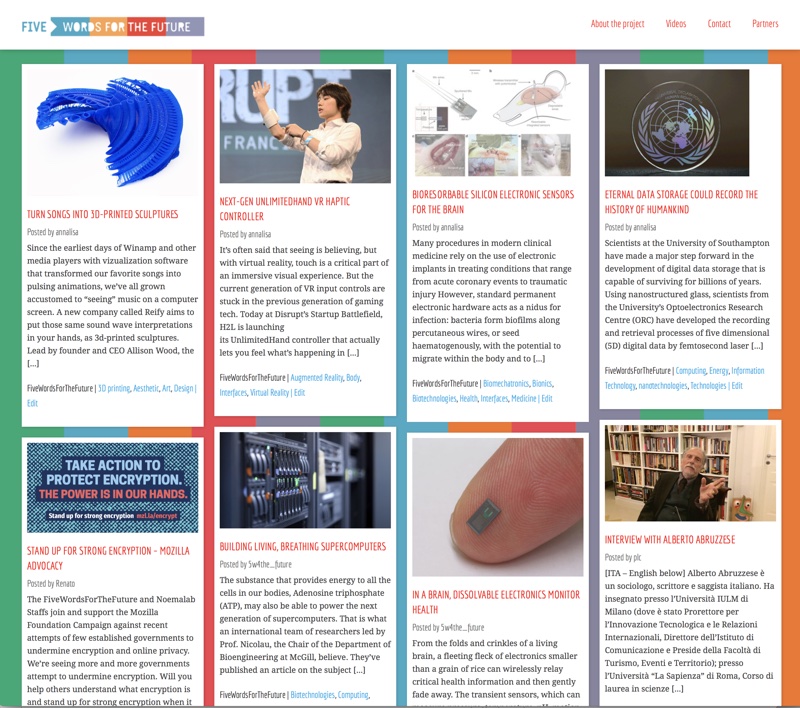