Noema is a web magazine in Italian and English on the relationships between culture and new technologies and on their mutual influences. “Culture” also means “habits”, “lifestyles”, “communications”, “arts”, “society”, “economy”, “media”, “philosophy”…, while “new technologies” should be intended in a broader meaning than the digital realm. Noema is a no-profit project, it’s free and with cultural goals. Noema has been on the Web since March 2000, and in 2003 RAI International selected it as best italian website.

It’s main objectives are to allow operators, students, institutions, associations, professionals and interested people, in the Italian, European and International realms, to understand and get in touch with the transformations induced by sciences and technologies on culture, society, communications, arts… And to offer an interdisciplinary approach and a look at convergences among different fields (communications, media, informatics, arts) and at the sinergies produced by the new information and communication technologies.

Noema was born in March 2000 as a website to support his founder’s new media and mass media courses as a repository and an information collection on new media in many realms allowing students of humanistic disciplines (who in many cases have only a few or no knowledges on these issues) to get in touch – both theoretically and practically – with technologies and their fundamental topics. Noema was also a way to involve the students in the planning, the editorial and the making of stages of a project.

The website increased the contents’ quality and quantity and the users’ number and participation. In 2003 Noema became a registered journalistic magazine (adding value and chances to the people and the material published) remaining a no-profit and free cultural project. Today Noema is an acknowledged cultural website and is linked and quoted in italian and international websites (institutions, companies, universities, organizations, magazines… and many personal websites), with a good number of users (about 30% of them is not italian). Noema was born in November 1999 and it has been officially online since March 2000. But it would be possible going backward in time, since its roots date back to the first ’90s, when in March 1994 a small group at the University of Bologna published NetMagazine (then renamed in MagNet), the first online magazine in Italy, an experience which is still mentioned in the books on the interface design.

Noema anticipated and influenced, for its contents, logics and sections, many websites on the relationships between culture and technologies, not only in Italy. The website followed the Web evolution, passing from pure HTML to databases and adjusting its interface until the 3rd release in 2004, which is still today’s unchanged ongoing release, maybe because there was not so much to change. In the meanwhile Noema gave birth to many projects, from didactics to publishing, from journalism to Open Source, to art…

In 2012, while the discussions on the Web 3.0 and on the Internet of Things arise, it is time for a leap forward, it is time for changing, for activating new functions and services that would have been impossible with the old release or would have required a long and uncertain work. But the old Noema  remains online as a huge archive of contents (2000-2011), and also of graphics, ideas, techniques, visions, ways of interpreting the online communication… that will become memory, and finally history.

Noema‘s 4th release is database driven and employs an engine that is secure and simple to use. It is almost ready, we have to complete putting the contents in and refine the interface. In March 2013  Noema completed its restructuring with the new website and a new International Board. In 2012 it reached the release 4.0, and now, thanks to the work of some Board members (in particular Renato Alberti and Emanuele Bertoni), it goes to the release 5.0. Just in time to be an organizational and media partner of art*science 2017/Leonardo 50 (Bologna, July 3 – 5), an International conference on the relationship between artistic and scientific disciplines which will be celebrating the 50th anniversary of Leonardo journal, published by MIT Press, the most influential in the international arena on the relationships among arts, sciences and technologies. art*science 2017/Leonardo 50 general topic is “The New and History”. 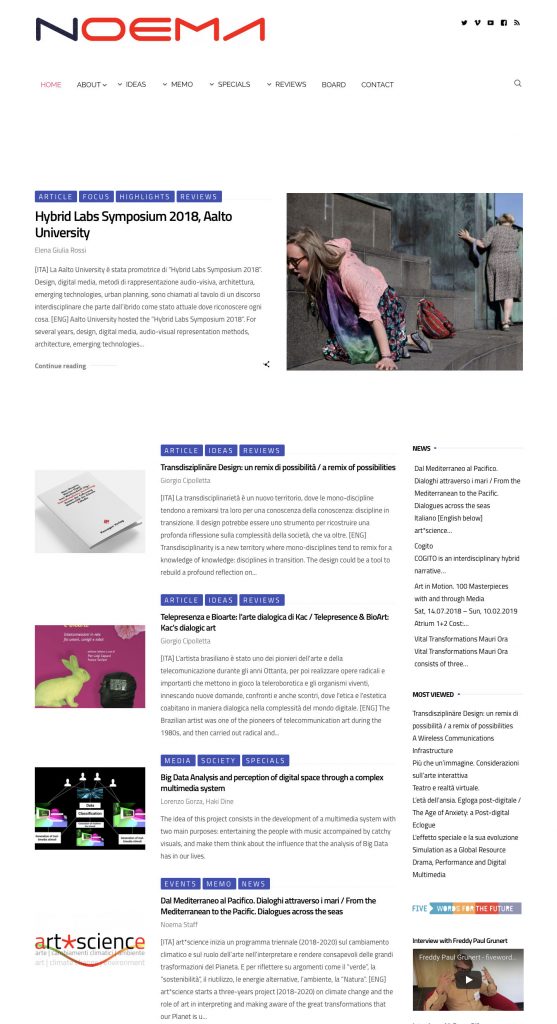