The evolving human inheritance. From symbols to life 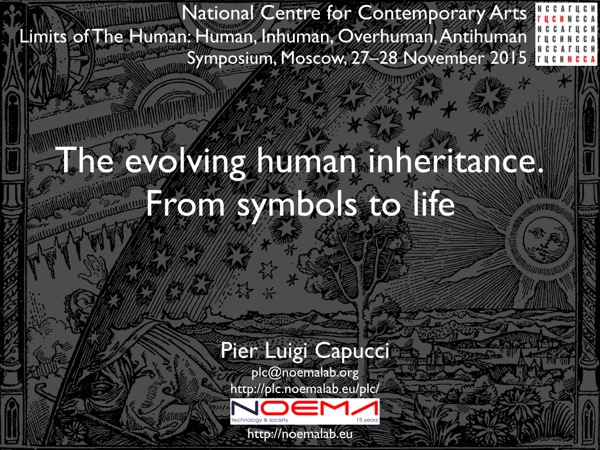 On November 27-28, 2015, at the National Centre for Contemporary Arts (NCCA) in Moscow I participated, with a presentation entitled “The evolving human inheritance. From symbols to life”, to the symposium “Limits of the Human: Human, Inhuman, Overhuman, Antihuman”, curated by Dmitry Bulatov and Madina Tlostanova (here the brochure). The symposium was the opening event of a wide interdisciplinary project, “The Human Condition”, that consists of symposia, exhibitions, master classes and lectures until 2017, taking place in some cultural centers in Moscow under the artistic direction of Viktor Misiano.

According to the brochure: “participants, academics from various disciplines, will discuss a new definition of humanity, overcoming classical anthropocentrism with its conception of man as the measure of all things. Post-humanity, one of the key concepts of the project, will look for a new place for the human in the modern world, inside of natural and subject relations, discovering human in things never previously recognized as human. 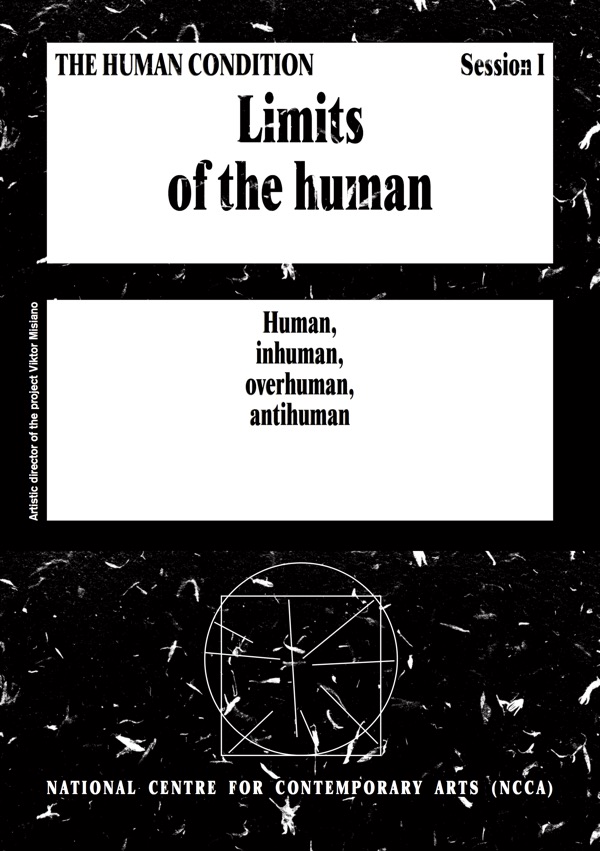 The symposium, who has been accompanied by the exhibition “Elective Affinities”, curated by Viktor Misiano, also at the National Center for Contemporary Arts, was split in two parts/days. The first one, “The Human Condition in an other-than-human world”, moderated by Madina Tlostanova, was more concerned about political and social issues:

“In the first day of the symposium theorists and artists discuss from different perspectives The Human Condition in today’s increasingly unsettled world marked by the ever-growing critique of anthropocentrism and Eurocentrism. Under scrutiny is the pluriversality and complexity of the new world, which are often better understood and metaphorically represented in contemporary art than in the majority of the dominant academic paradigms which cannot catch up with the rapidly changing reality. We also analyze the borders and coalitions between the human, the natural and the animal, as seen in the critical discourses on biotechnologies, trans* studies, capitalist modernity/coloniality, affect theory, etc. Contemporary concepts of Western antihumanism are problematized from the position of non-Western forms of other humanism (as a humanism of the other), as a reiteration of the importance of humanist premises that have never been fulfilled in relation to liminal subjects of modernity seen as “problems”, whose bodies act as powerful markers of difference, assimilation, rejection, resistance and re-existence. In our presentations, discussions and the round table wrapping up the first day of our symposium, we try to offer some answers to the questions of where and how the humankind – as a multitude of plural and mobile entities – existentially exists in our difference. Are we able to imagine and put to life some post-utopian and post-dystopic scenarios for our complex world and its inhabitants?” 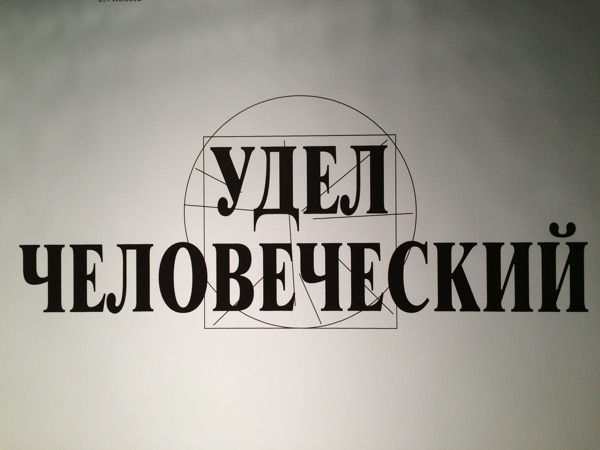 “The principle question of this session may be formulated concisely in the following way: “How can simple localized actions create truly complex patterns?” Our intention is to consider this problem, using the examples that have emerged as a product of technological activities of the modern man. Among such agents are programmable matter, symbiotic forms and hybrids, “semiliving” entities and other manifestations of life existing “at the edge of chaos” and disorder. All these nonhuman subjects, interacting with one another, engender a complex systemic whole – a new sphere of existence, wherein the role of humanity is not of primary concern. How then can the effects of such self-organization be analyzed? How can this borderline state be located, beyond which the improbable manifestations of new technologies become our daily reality? What role can art and philosophy play in making sense of this new world and the orientation of our values within it? The participants in our session, “Living Typologies / Nonhuman Agencies” – philosophers, sociologists, art and new media theoreticians – answer these and other questions.”

There was a large participation of public and a good discussion on the topics presented and on the questions that were raised. 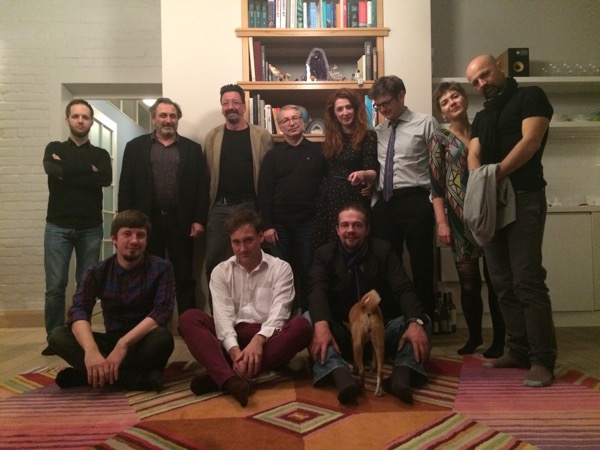 Apart the lovely time I passed discussing, talking and chatting with the other participants, with the perfect assistance of Olga Demina, on Saturday evening I was invited with some colleagues to a beautiful private dinner in the apartment of Daria Parkhomenko, founding director and curator of “Laboratoria”, an Art and Science space in Moscow. And on Sunday I had even the time for a short but intense visit to Moscow with Richard Doyle and Jens Hauser, under the superbe guidance of Yulia Mironova. 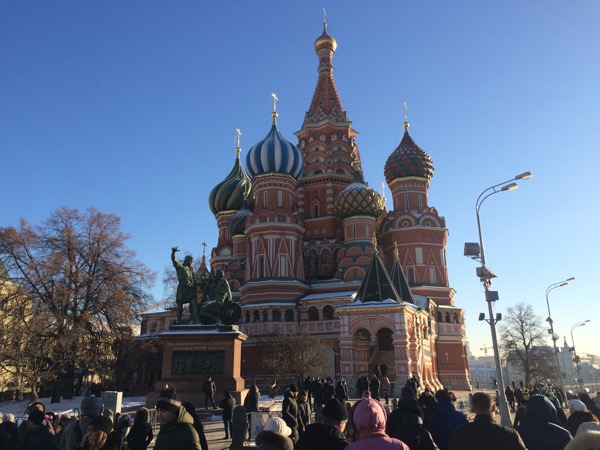 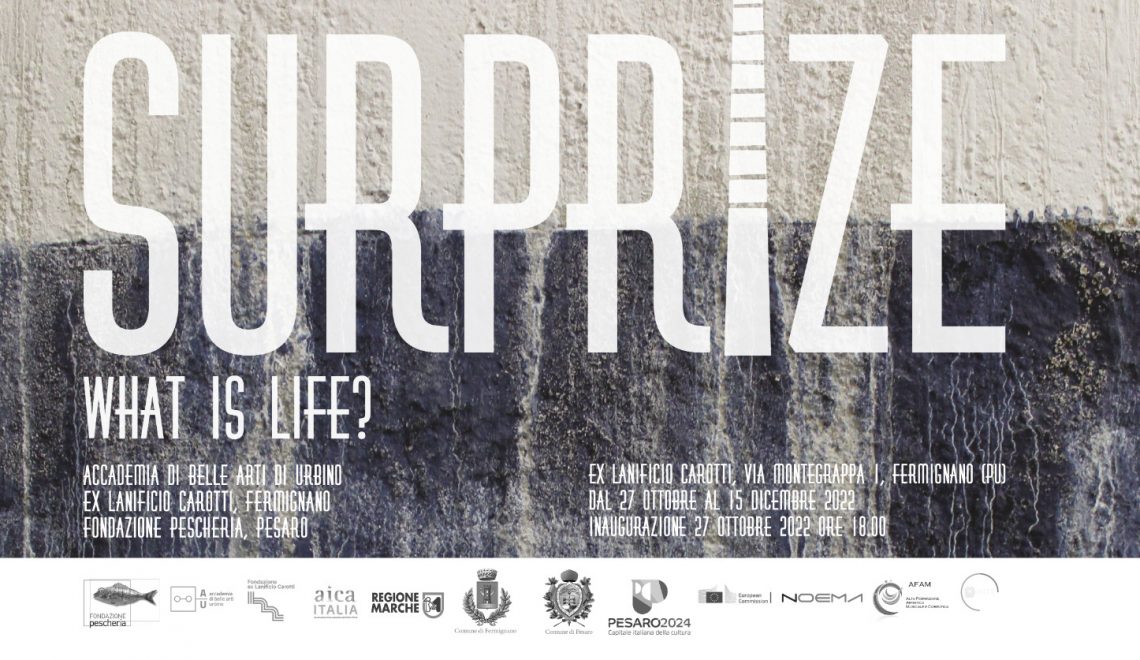 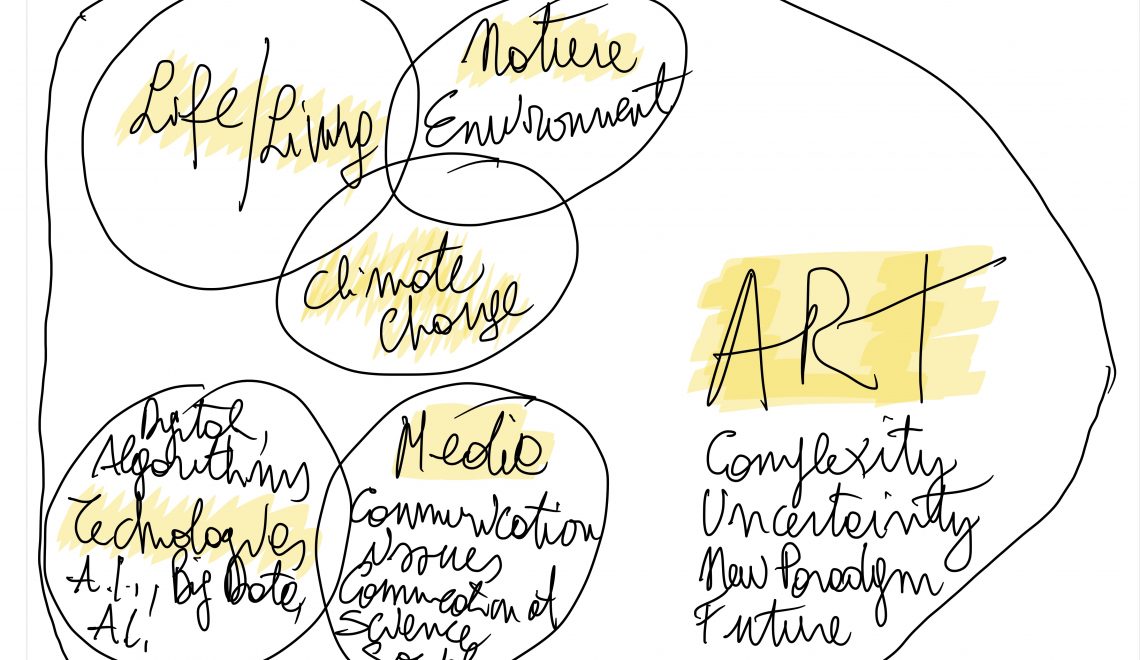 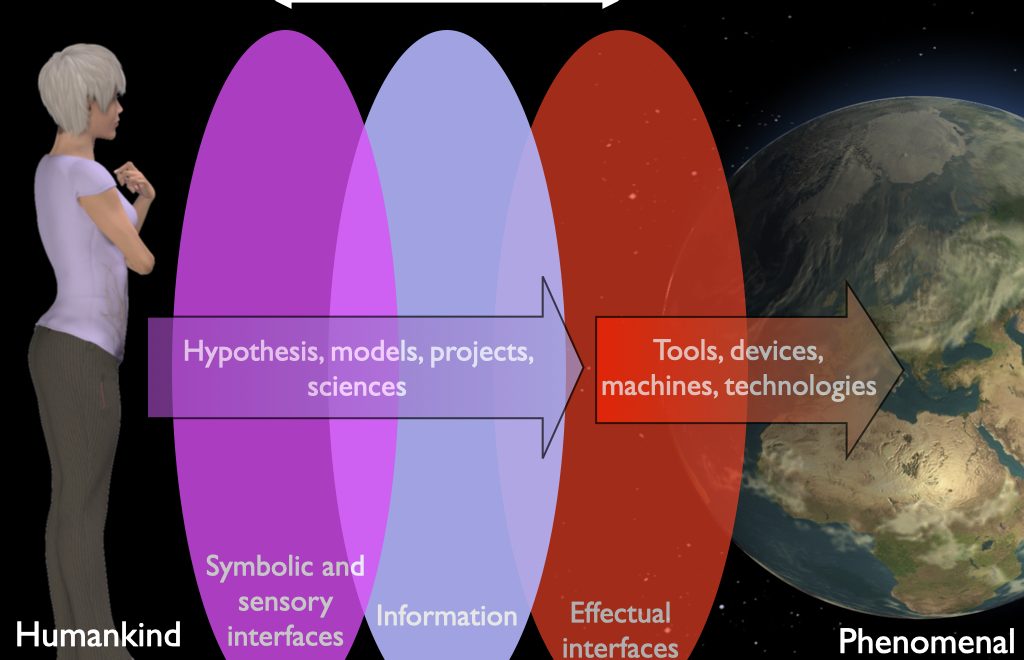