Evolution Haute Couture: Art and Science in the Post-Biological Age 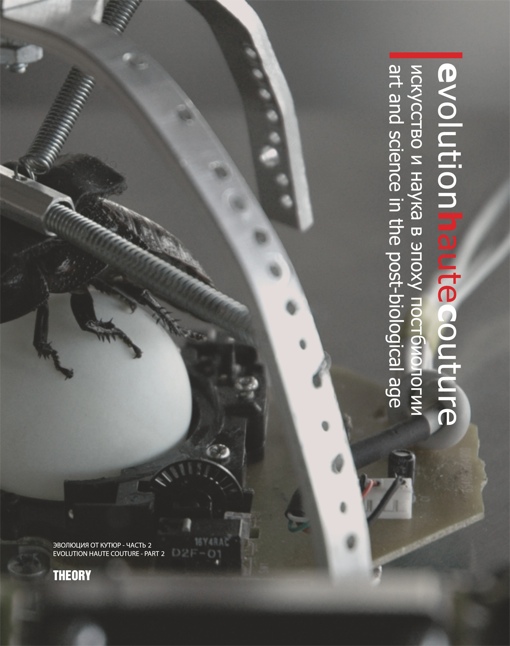 It has just been published, both in Russian and English, the book edited and curated by Dmitry Bulatov Evolution Haute Couture: Art and Science in the Post-Biological Age. Part 2: Theory, Kaliningrad, BB NCCA, 2013. The volume, that contains an essay of mine, is a wide attempt to represent the contemporary theoretical panorama about the influence that the “new sciences” and disciplines (Biology, Genetics, Artificial Intelligence, Artificial Life, Robotics, Cybernetics, Neurosciences, Nanotechnologies…) can achieve in the contemporary culture and in the art forms, in order to foster a global reflection about this evolution. The Part 1, about the practice in these disciplines, was published in 2009, and here you can find some information about it.

From the book’s brochure:

How can the radicalization and redundancy of science and technology progress be defined? What is the evolutionary potential of 21st Century technology trends such as robotics, IT, biomedicine, and nanotechnology? Each of these trends actualizes traditionally formed boundaries of the beginning and end of human existence, the demarcation of norm and pathology, and the distinction of the non (or semi) organic model or entity. These, and other issues, cannot be taken into consideration without the experience of contemporary techno-biological arts – the representatives of which do not so much confirm the technological versions of contemporaneity, as determine these versions’ boundaries. Art created under new conditions of postbiology – that is, under conditions of an artificially fashioned lifespan – cannot help but take this artificiality as its explicit theme. In questioning the causes and consequences of technological progress and its central role in today’s society, renowned representatives of contemporary art, science and philosophy are attempting to elucidate the foundation that gives rise to “artificial,” “technological” reality, as well as to explain how this reality impacts us. Is it possible to reinvent a language that can simultaneously construct and describe the world of technology? The aim of this book is to show how artists are creating new forms and new identities – not as the protagonists of a historically-determined technological narrative, but as its creators.

INTRODUCTION
Dmitry Bulatov         Art and Science as the Conjectured Possible

I. PATENT FOR LIFE:
Doorway to the Post-Biological Culture
Stephen Wilson     Issues in the Integration of Art, Science and Technology
Roy Ascott         The Tao of Variability: The Multiple Self in a Multiple Reality
Pier Luigi Capucci     Declinations of the Living: Toward the Third Life

II. ARTIFICIAL BUT ACTUAL:
Artificial Intelligence and Artificial Life
Paul Brown         Notes Towards a History of Art, Code and Autonomy
Jon McCormack     Evolutionary and A-life Art: Cosmic Pyramids and the Origination of Novelty in Machines
Simon Penny         Art after Computing

IV. SHINING PROSTHESES:
Robotics
Jana Horakova     Robot and Kitsch: From the Myth of Technological Progress Towards the Medium of Subversive Strategies of Posthumanism
Dmitry Galkin         Cybernetic Art in the 1950s-60s: Robotic Sculptures
Louis-Philippe Demers     Machine Performers: Neither Agentic nor Automatic

IX. POST-SODOM AND POST-GOMORRAH:
From Nano to the Technological Unconscious
Luciana Parisi         Nanoarchitectures: The Arrival of Synthetic Extensions and Thoughts
Colin Milburn         Postmortem: The Necrosis of Nanotechnology
Dmitry Bulatov         A New State of the Living

Dmitry Bulatov is an artist, curator and art theorist. His research focuses on different aspects of interdisciplinary art media, as well as on submediality aesthetics. His artworks have been presented internationally, including 49th and 50th Venice Biennale (2001, 2003), Ars Electronica Festival (ORF, 2002) and many others. Bulatov has taken part in numerous international contemporary art conferences and given lectures in Russia, USA, Canada, Germany, Mexico, Singapore and Hong Kong. In 2007 his artwork has been selected by Wired magazine as the world’s 10 top innovations. In 2009 he has been awarded the National Innovation Award for Contemporary Visual Arts. He has curated about more than twenty major exhibitions in Russia and abroad, including “SOFT CONTROL: Art, Science and the Technological Unconscious” as part of the Maribor – European Capital of Culture 2012. Since 1998 Bulatov is the curator at the Baltic Branch of the National Centre for Contemporary Arts (Russia).