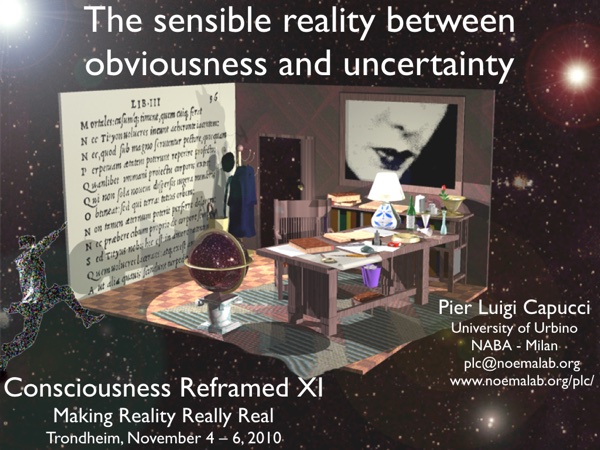 I participated to this conference in Trondheim, a very interesting and intense experience I shared with many people and friends. On the general topic of the conference (Making Reality Really Real) and its implications I have been working for years, and also in 2010 I delivered some lectures and participated to public events. It seems that these topics, which pivot around the meaning of “simulation” and “reality”, are raising a new interest due to the new technologies and emerging sciences. My paper (“The sensible reality between obviousness and uncertainty”) is published in the book of the proceedings [R. Ascott, E. Gangvik, M. Jahrmann (eds.), Making Reality Really Real – Consciousness Reframed XI, Trondheim, TEKS Publishing, 2010] and I also published it online in Noema.

For a taxonomy of the senses

“The status of our reality is uncertain. The solid objective world of our everyday experience is a representation of an oscillating immateriality that we recognise, at another level of resolution, as constituting quantum phenomena. It’s not that matter doesn’t matter anymore, so much perhaps as the idea that matter isn’t matter anymore. Can we not reasonably ask whether there is a reality beyond what quantum mechanics describes, even closer to the really real? If our material, everyday world depends on our consciousness, what existed in the world before human consciousness had evolved, and how will the world look if our consciousness evolves still further? For many who live largely online, cyberspace accommodates a vivid and consequential normality that renders the material world less relevant to their lives. Until recently, we adapted our sensibilities to fit into separate boxes, variously identified as real, virtual, spiritual, and so on, which we saw as being served by separate ontologies. That separation has now merged into a flowing continuity, in which telecommunications, computing, nano technology, bioengineering and pharmacology play significant roles. The binary opposition between real and virtual realities no longer holds, and the Western conception of the individual human brain creating its own isolated mind may be giving way to the recognition  of a connected intelligence seeking fuller access to a primordial field of universal consciousness. What might be the role of the artist in all of this?  Can a trans-disciplinary art practice contribute to strategies for making the real really real? (Roy Ascott, 2010)”

More images on Consciousness Reframed XI have been posted in Facebook.