The Large, the Small and the Human Mind

Well, just a week after going to Luxembourg to see the “sk-interface” exhibition, in January 16-17 I went to Lucerne (Switzerland) to follow the conference “The Large, the Small and the Human Mind” (from the title of Roger Penrose’s book). Placed inside the Swiss Biennial on Science, Technics and Aesthetics, the event performed a two days confrontation among science, art, technology and culture, with the participation of famous speakers like, among the others, Fritjof Capra, Bruno Latour, Isabelle Stengers, Peter Weibel. 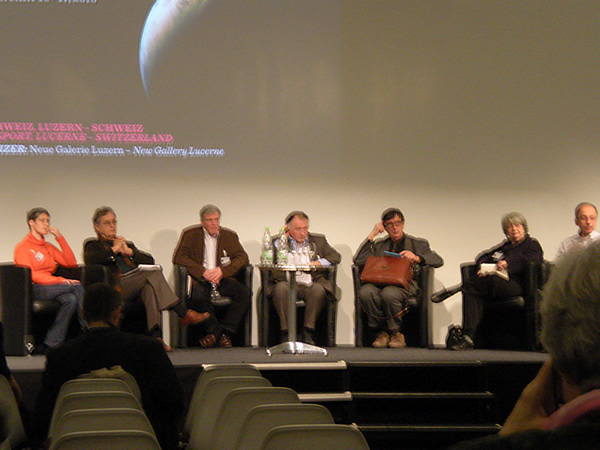 The curator of the event is René Stettler, who is the Artistic Director of the New Gallery in Lucerne which organized the event at the Museum of Transportation. An interesting meeting indeed, in the framework of the beautiful lake of Lucerne.

Roger Penrose’s hotly disputed book The Large, the Small and the Human Mind (1997) contributed to a new scientific world-view of physics and a more complete understanding of conscious minds at the boundary between the physics of the small and the physics of the large. In a similiar vein, the Swiss Biennial 2010, The Large, the Small and the Human Mind, will trigger debate about the unequal status that we have attributed to the physical world “out there” and our many beliefs and mental conceptions “in us” about this world, and it explores the fingers of science, rationality, ontology, epistemology, reflexivity, ethics, ecology, and politics that point to the realities of our beliefs.

The New Gallery Lucerne organises this two-day conference which brings together a group of internationally renowned scientists, sociologists, philosophers, ecologists, writers, artists, and policy-makers. From the debate about the pursuit of a “Theory of Everything” (TOE) in physics, extreme objectivity, our relationship to the “Universe,” to “human,” “nature,” “human culture,” and the “human mind,” The Large, the Small and the Human Mind will touch on the world’s first climate war, the destructive side of globalization, and the contradictions of our striving for unlimited economic growth and consumption. “When the sage points at the Moon,” says the Chinese proverb, “the fool looks at his fingertip.” The Large, the Small and the Human Mind offers a critical look at the fingertip, and from it to the Moon. From the question of how to free Pandora’s Hope, to the meaning of Leonardo’s science for our time, and the significance of the Space Age for humanity, the Swiss Biennial will reflect on these topics from an interdisciplinary perspective with the aim to create a broader and finer sense of possibility.